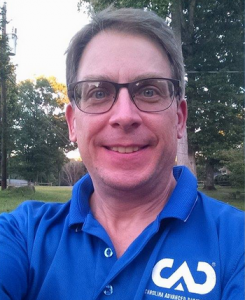 Harry arrived to North Carolina by way of Pennsylvania, where he spent his first 29 years in a variety of occupations, including stints as a colicky infant, ne’er-do-well adolescent, and, having demonstrated mastery of those professions, graduation to a full-time college student at The Pennsylvania State University. 29 years is a lot of time to spend in one place, even when it’s as glamorous and exotic a location as Pennsylvania, so Harry decided it was time to go.

The Keystone State’s loss became North Carolina’s gain when Harry headed down south and joined the Carolina Advanced Digital crew for his first tour of duty, as a computer and printer service technician and occasional office sage. Those 7 years went by in the blink of an eye, then Harry stepped out for lunch one day and never came back. 10 years later, he showed up back on our doorstep, cold and wet and with thistles in his pelt, and he’s so darn cute and lovable, we just had to take him back!

One other reason to take him back is that Harry knows a thing or two about networking and security, and how to effectively and efficiently make those domains hum within a Solutions for Enterprise-Wide Procurement (SEWP) context… so yeah, bringing him back as a SEWP Program Specialist makes a lot of sense!

When you ask Harry what he thought of the Panthers game, don’t be startled by the sounds of silence. It’s not because Harry is a Falcons fan, it’s just because Harry doesn’t watch sports and doesn’t give a fiddlestick about ’em. While he was a student, he didn’t even realize Penn State won the Fiesta Bowl in 1987 to become football national champions, so if you’re a University of Miami fan go ahead and pretend to him that you guys won that game.

Harry wants you to know he doesn’t like coffee or even coffee-flavored products. He’s also not a fan of mayonnaise, mustard, or really any condiments at all. (Coffee-flavored mayonnaise is a real sore spot, so don’t even ask.)

What you can ask Harry about is what it’s like to be a granddad. He’s relatively new to the game – his daughter waited until September 2015 to make it happen – but he seems to be taking to it like a natural, and so far his granddaughter has very few complaints.

Welcome back, Harry – we missed you!

To all you scholars out there, keep this on your radar: @ISC2Cares Information Security Undergraduate Scholarship opens Nov. 16! More details here: https://bit.ly/3iK5OuM

We're stoked to be an exhibiting sponsor at @nclgisa Fall Symposium! Schedule a 1:1 meeting with our team and tune into our Tech Session webinars: https://bit.ly/37macxf

Looking for plans on Nov. 3? Register for @Fortinet's FortiClient Fabric Agent webinar for hands-on experience at deploying and managing the platform: https://bit.ly/3iR9Ph1